Founding of the Office of the Public Protector

According to the Constitution, all Chapter 9 institutions:

Since 1994, three individuals, Selby Baqwa (1995-2002), Lawrence Mushwana (2002-2009) and Thuli Madonsela (2009-2016), have served as the South African Public Protector. Madonsela, who was interviewed for the position in the final days of Mbeki’s tenure, served during the short tenure of President Kgalema Motlanthe and that of the incumbent President, Jacob Zuma. In fact, it was Zuma who signed off her appointment.

Transformation of the Office of the Public Protector

Within a year of her appointment, Madonsela tended to the strategic direction of the Office, as contained in two documents, Public Protector Vision 2020, and Strategic Plan 2010-13. The latter was amended annually, and by 2016, the Strategic Plan 2016-2021 was released. She re-structured the Office, re-organised each of the Office’s units and included at least two individuals, who specialised in a specific area such as Justice or Local Government. She also put in place a trainee programme, the Trainee Investigative Programme, which, by 2014, employed 100 trainers. Moreover, in order to maintain the integrity of the Office, no performance bonuses were paid to staff. In addition, a business systems engineer was appointed to improve the Office’s business practices.

The transformational change of the Office of the Public Protector

Madonsela also re-organised the Office’s triaging process to improve its efficiency in the handling of cases. She established an Early Resolution Unit, and a Good Governance and Integrity Branch. She also established a Customer Service Unit as well as a Legal and Quality Support Unit, which dealt with quality assurance and compliance monitoring. This was complimented by an increase in public outreach programmes and initiatives such as the deployment of mobile offices. In 2013, for example, the Office reached out to 20 million people. Another aspect that distinguishes Madonsela’s tenure as Public Protector, besides the large caseload, is the high number of investigative reports initiated by her Office.

In summary, during Madonsela’s tenure she significantly transformed the Office of the Public Protector. Apart from good governance, she led the strategic re-orientation and organisational renewal of her Office with the conclusion of the Office’s seventh Strategic Plan review. Another positive transformation is the higher public profile, and improved public access to and public trust in the Office.

Transformational change occurred as a result of two processes, namely improving the rules of the game, whilst playing according to the rules of the game. Madonsela’s most significant rule was to always follow the constitutional mandate, to which she did. The following of this rule, alongside the improvements made, allowed for transformational change to occur in the Office.

In 2012/13, Madonsela’s Office dealt with 35 000 complaints against the state, including allegations of state corruption and financial abuse. In 2013/14, the number of cases increased to 39 817. In March 2014, after legal attempts by the Zuma administration to prevent the release of the report, Madonsela released a report, Secure in Comfort, which became known simply as the “Nkandla report”. The report concluded that President Zuma unduly benefitted from non-security installations at his private residence. The Secure in Comfort report also concluded that President Zuma should repay the funds spent on non-security installations; and contradicts Zuma’s earlier statements that his family paid for the upgrades. The main impacts (positive and negative) of Madonsela’s work as the Public Protector are presented in this section.

In the first instance, Madonsela was recognised locally and internationally for her investigations, which not only upheld the Constitution, but also resulted in convictions. In 2014, for example, Time magazine named her one of its annual 100 Most Influential People in the World, and Transparency International honoured her with its Person of Integrity Award. She also received the South African of the Year Award; the FW de Klerk Foundation Goodwill Award; and the Sydney and Felicia Kentridge Award from the General Bar Council of South Africa. 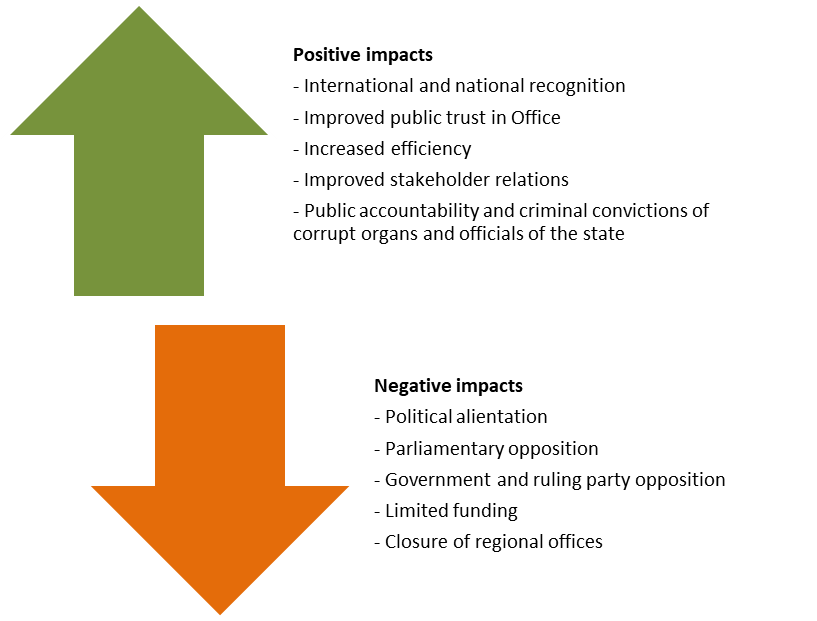 In the second instance, restoring the levels of public trust or, according to Madonsela, reversing ‘a growing trust deficit between organs of state and the people of South Africa in government’. The public’s intolerance of poor governance and corruption increased the number of cases reported to and investigated by the Office. Madonsela’s investigations had resulted in, for example, the axing of two Cabinet Ministers, Sicelo Shiceka, and Gwen Mahlangu-Nkabinde, and achieved a guilty verdict against South African Police Commissioner, Cele. The release of reports implicating state organs or officials and subsequent convictions contributed to greater public trust in the Public Protector. One example of public trust in the Public Protector is that a large number of Facebook pages were created and devoted to Thuli Madonsela, indicating multi-thousands of followers. See also Mandonsela’s twitter account with 675 000 followers available at @ThuliMandonsela3.

As far as negative impacts are concerned, the Office of the Public Protector, its mandate, its functions and Madonsela herself were questioned, attacked and discredited by government officials and MPs alike. This escalated, when the Nkandla report was released. The South Africa Deputy Minister of Defence, Kebby Maphatsoe, for example, accused her of being ‘a CIA [United States of America Central Intelligence Agency] spy’. The Minister of Police even threatened to arrest her, if she were to release a report on President Zuma prior to the 2014 national elections.

Furthermore, relations between the Office of the Public Protector and the Presidency, and between Parliament and the Office became severely strained, and resulted in Madonsela’s political alienation. In 2014, Madonsela, along with the leaders of other Chapter 9 institutions, was called to appear before the Portfolio Committee on Justice and Correctional Services due to ANC MPs’ concerns about the overlapping of these institutions’ mandates. In response, Madonsela reiterated her Office’s constitutional and additional legislative mandate, as well as providing a matrix of ‘mandatory overlaps’ with other institutions in South Africa’s multi-agency anti-corruption architecture, i.e. the Special Investigating Unit, Anti-Corruption Forum and the Hawks.

Added to this hostility, Parliament did not always approve the Office’s proposed budget, or approved only a marginal budget increase; increases, which the Public Protector referred to as ‘incremental rather than developmental’, which left the Office with a shortfall of at least ZAR 200 million (US$15million). This was particularly evident after the release of two reports, amongst others, one (Against the rules) on the lease of new police headquarters, and the report (Secure in comfort) on President Zuma’s private residence in Nkandla.

These financial punitive measures resulted in continued understaffing. Another result was the closure of some of the Public Protector’s regional offices in rural areas. These closures meant that Madonsela’s idea of having offices in every municipality in the country could not be realised; many South Africans were not able to report cases; the Office could not investigate local cases of state abuses of power; and the 276 vacancies in the Office could not be filled, despite the fact that the current staff compliment of 314 was insufficient to deal with the number of cases. This in turn undermined the capacity of the Public Protector’s Office to investigate reported cases.

Overall, Madonsela’s work had both positive and negative impact. The positive effects include the international and national recognition for the Office; improved public trust in the Office; increased efficiency; improved stakeholder relations; public accountability; and criminal convictions of corrupt organs and officials of the state. Negative effects, caused by hyper-efficiency, include political alienation through limited budgets granted to the Office of the Public Protector, closure of regional offices and parliamentary and ruling opposition.

(1) Prof Jo-Ansie van Wyk (Department of Political Sciences, University of South Africa) has been a member of In On Africa (IOA) since 2008. She has been actively involved in various IOA client projects and IOA-driven initiatives, and has also conducted consultancies for, among others, the World Bank and UNESCO. Her publications and research experience focus on political leadership in Africa, nuclear diplomacy, energy, environmental politics and international security.