Over the last three decades, nuclear power has faced various challenges toward worldwide implementation. The Three Mile Island, Chernobyl and Fukushima disasters in the 1970s, 80s and 2010s, respectively, have setback the rollout of further plants around the world, from China to the US. At present, South Africa is the only African country to make use of nuclear power as part of its energy mix. The Koeberg Nuclear Power Station in the Western Cape province provides close to 1,900 MW of power to the central grid, accounting for 5% of total power generation in the country, and 95% of energy generation in the Western Cape.

The South African government has, however, made strides toward increasing the share that nuclear power plays in the country’s electricity generation and has set bold targets of adding an additional 9,6 GW of nuclear energy in the next 15 years. The costs of this additional power have been a big challenge, indicates IOA consultant and professor of political science at UNISA, Jo-Ansie van Wyk. “Typically, a nuclear energy expansion plan such as this requires a long-term relationship and not just a once-off delivery once the power station is operational. A third factor is the preferences of the South African population. Civil society has opposed the nuclear expansion plans and government has seen that civil society will question every decision,” she says.

Jo-Ansie van Wyk is a Professor at UNISA’s Department of Political Science and has been a member of the In On Africa (IOA) team since 2008. Her publications and research experience focus on political leadership in Africa, nuclear diplomacy and energy, environmental politics, and international security.

The South African government has faced various hurdles in implementing the rollout of the nuclear programme. For one, nuclear sceptics within the African National Congress (ANC) – South Africa’s ruling party – as well as civil society organisations need to be persuaded to support government’s ambitious plans. Similarly, key economists, the National Treasury, credit rating agencies and other investors will also need to be swayed toward the feasibility of going ahead with a decade-long nuclear build programme that is projected to cost in excess of US$ 75 billion.

The debate surrounding the cost of the planned nuclear developments has many arguing that South Africa simply cannot afford such an expense. The recent credit rating downgrade to junk status brings further instability in generating foreign investment for the proposed plans. Additionally, Russia – whom many believe is leading the race for procurement deals – has also received ratings downgrades in the last couple of years, which will likely curtail their own foreign investment plans.

The government faces additional setbacks in the vendor procurement process. In late April 2017, the Western Cape High Court ruled the previous process of vendor procurement invalid and stated that the nuclear programme procurement be redone with all current structured deals with vendors from the likes of the US and Russia be nullified and void. This may result in government appealing the decision, but this may also result in government enforcing greater legal compliance while also looking for political leverage from nuclear sceptics within the ANC to support the current earmarked vendors, added van Wyk.

Taking stock of the challenge

On the other hand, South Africa has been one of the few countries around the world that has successfully implemented a transparent and effective renewable energy programme, through the Renewable Energy Independent Power Producer Procurement Programme (REIPPPP). Since inception in 2011, the REIPPPP has managed to add an additional 2 GW of power to the central grid through renewable energy sources. However, in recent years, government has stalled the introduction of more renewable energy and provided various arguments against further implementation, such as insufficient base load supply, high generation costs and the ability to meet current demand through coal power.

Van Wyk notes that this is also likely the result of political pressure to implement the nuclear build programme. For government, rolling out a nuclear strategy would mean that the country is advanced enough, as well as wealthy enough to do so. The implementation of such a programme also adds to a country’s prestige status for having successfully constructed a nuclear power station.

“Whereas some states – like Germany – have decided to terminate nuclear energy generation, others – like Switzerland – will go to a referendum to decide the future of nuclear energy generation. South Africa is also a member of the BRICS grouping. The grouping consists of some of the world’s largest nuclear power generators, nuclear energy expansion plans and nuclear weapons capabilities. As a powerful counterweight to the developed North, BRICS countries are flexing their economic, technological and nuclear muscle. Subsequently, South Africa derives significant status from its membership in the grouping. South Africa is, in essence, one of the states that intends to proceed with nuclear energy,” van Wyk elaborated.

These ambitions are not without their challenges. According to van Wyk, if the development and planning process is to be successful, there are a number of examples that the South African government should follow from countries that already use nuclear power extensively. “Public consultation is one. The South African government has a poor record when it comes to communicating about its nuclear plans and nuclear energy, despite the existence of Public Consultation Forums for communities close to nuclear sites. ‘Safety first’ is another key takeout in terms of the nuclear option. South Africa needs to communicate nuclear energy as a potentially safe and clean energy option. Moreover, a public communication strategy on the government’s nuclear safety record should also be introduced. Thirdly, there is a definitive need for transparency. The Cape High Court ruling illustrated the lack of transparency in the government’s approach to nuclear energy and the nuclear energy development programme. Parliament should also hold key decision-makers accountable. Lastly, there are cost considerations to take into account. The development of nuclear energy is very costly and requires a state to engage in a decade-long relationship with the vendor[s]. Therefore, South Africa needs to be mindful of the cost and relations it intends to engage in.”

Safety will always be a cause of public concern with nuclear energy, given the history behind nuclear energy. South Africa’s choice of nuclear technology will need to be cost-effective, proven and safe. Additionally, international standards of best practice need to be followed to avoid not only a nuclear disaster like those previously mentioned but also to reduce downtime and maintain a constant and uninterrupted electricity supply – a vital component to any economy.

Arguments have been made that, over the long term, the construction of the nuclear plants will be beneficial to the South African economy. Studies conducted on the matter have, however, produced conflicting findings on the cost effectiveness of nuclear power in comparison to renewable and non-renewable alternatives. One thing is certain, if the developments were to prove beneficial to the South African economy, localisation of investments would be essential. Van Wyk agrees that “Government may achieve this with the amendment of BEE legislation and localisation clauses in international contracts pertaining to the programme. Unless the South African economy grows significantly, the proposed nuclear energy development plan will plunge the country into economic bankruptcy.”

A 2016 study by Trusted Sources found that the South African economy could be boosted by around 25% if the maximum possible localisation of investment occurred in the building of the new power plants. The same study also suggests that a one-fifth reduction in carbon emissions is possible and that the reduction will bring a significant decrease in carbon taxes, not to mention the environmental benefit of such a cutback.

Given the significant uncertainty and debate surrounding the nuclear deal, van Wyk notes that diversification in energy supply should still be made a priority. She also warns that we must bear caution with the election of new leadership within the ANC, ahead of the upcoming national elections in 2019, in order to gain a more definitive outlook on the future of the nuclear programme. “I propose the development of various energy sources with nuclear energy development as a future option. Secondly, the outcomes of the ruling party’s national conference and election of new leadership, as well as the 2019 elections, are all factors that could determine the future of the country’s nuclear energy programme. Thirdly, South Africa should also improve the governance and functionality of Eskom, the state-owned power utility, as Eskom is likely to oversee the nuclear energy development plan.” 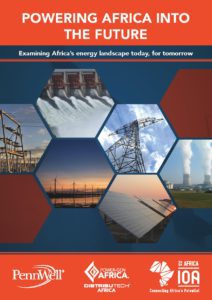 Powering Africa into the future

African countries face a multitude of challenges in providing sufficient and affordable power access. Generation plants, transmission and distribution infrastructure and retail-facing entities, are all needed to realise the larger rollout of electricity across the continent. Considering different energy sources for different markets is also paramount in utilising available resources to their maximum potential; from coal in South Africa and Botswana, to hydropower in Ethiopia and Kenya, and solar power in Morocco.

IOA’s latest special report, in partnership with POWER-GEN & DistribuTECH Africa, provides insights on key topics such as sustainable energy market initiatives, renewable energy implementation, the impacts of the digital technology revolution and the prospects for South Africa’s nuclear build programme, among others.