Analysis in brief | Not just for trade, Africa’s economic communities have restored order to countries in conflict and addressed social issues from education to health, while unifying regions through common transportation and commerce policies. However, as their scores on In On Africa’s ACBR 2017 index shows, not all regional blocs are equal performers. 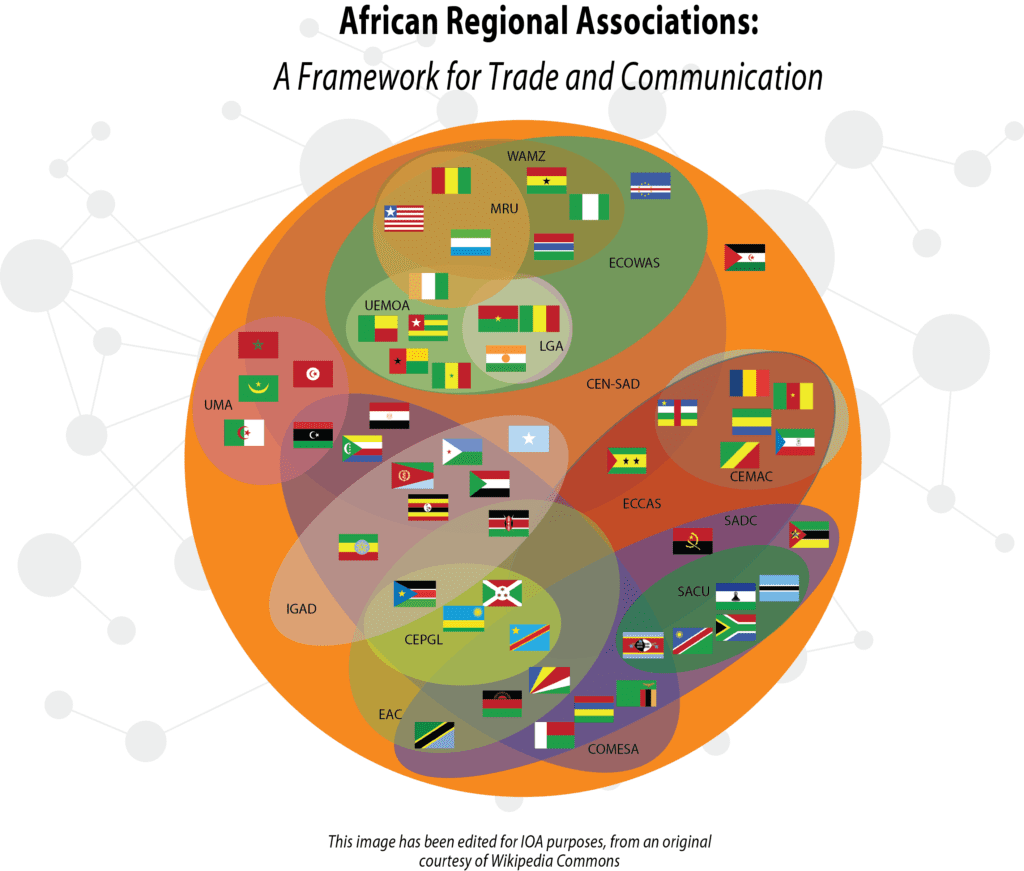 A review of ACBR 2017 findings draws conclusions not only on individual country performances but also on how the trade blocs, or regional economic communities (RECs), of Africa’s five regions are performing, Central, East, North, Southern and West. Each region has its own characteristics, attributes, accomplishments and challenges. Similarly, RECs have unique attributes. The Southern African Customs Union (SACU) is devoted to one agenda: dividing the profits of customs duties among member states of goods imported into the region. The Southern African Development Community (SADC) consists of all SACU members and other regional countries and has a much broader political and social development agenda, similar to the East African Community (EAC) and the Economic Community of West African States (ECOWAS). North Africa is managing its economic growth and security problems without a strong regional organisation guiding their efforts. Central Africa’s under-development and political instability is not mitigated by its body of regional integration, the Central African Monetary Community (CEMAC). While SADC is progressing with economic initiatives and has a strong military component, SADC was West Africa’s regional body that most recently made practical application of its regional military force in the bloodless removal of The Gambia’s dictator, Yahya Jammeh.

Africa’s RECs comprise 12 major organisations. The five main regional blocs in addition to ECOWAS and SADC are the EAC, the Economic Community of Central African States and the Arab Maghreb Union (AMU). Another major or so-called ‘pillar community’ joining these is the Community of Sahel-Saharan States or CEN-SAD, which spans three African regions and has the largest membership of all regional bodies, with 28 nations. All African RECs are theoretically subsumed under the African Economic Community, a continent-spanning body established within the African Union.

Most RECs are devoted to inter-regional trade, but some have military and political components. Some trade blocs exist within larger regional blocs, like SACU within SADC or the West African Monetary Zone within ECOWAS. Not all countries belong to trade blocs of their region and instead belong to region-spanning trade blocs, like the Common Market of East and South Africa. This complicates the drawing of conclusions regarding the effectiveness of trade blocs on all countries of a region. However, the economic, political and social accomplishments of each bloc are discernible from the performances of their member states as gauged by the ACBR 2017. The countries of the relatively more stable and prosperous Southern African region earn higher cumulative scores, which, when factored together, gives SADC an overall score of 47.48 on the ACBR. The scores of the countries of Africa’s most conflicted and underdeveloped region, Central Africa, combine to give CEMAC the lowest score of Africa’s RECs, 38.21. West African states’ scores provide ECOWAS marks midway between Central and Southern Africa at 43.43. East Africa’s EAC scores slightly below ECOWAS, 41.03, tracking the same trend that East African and West African states display in their ACBR performances. 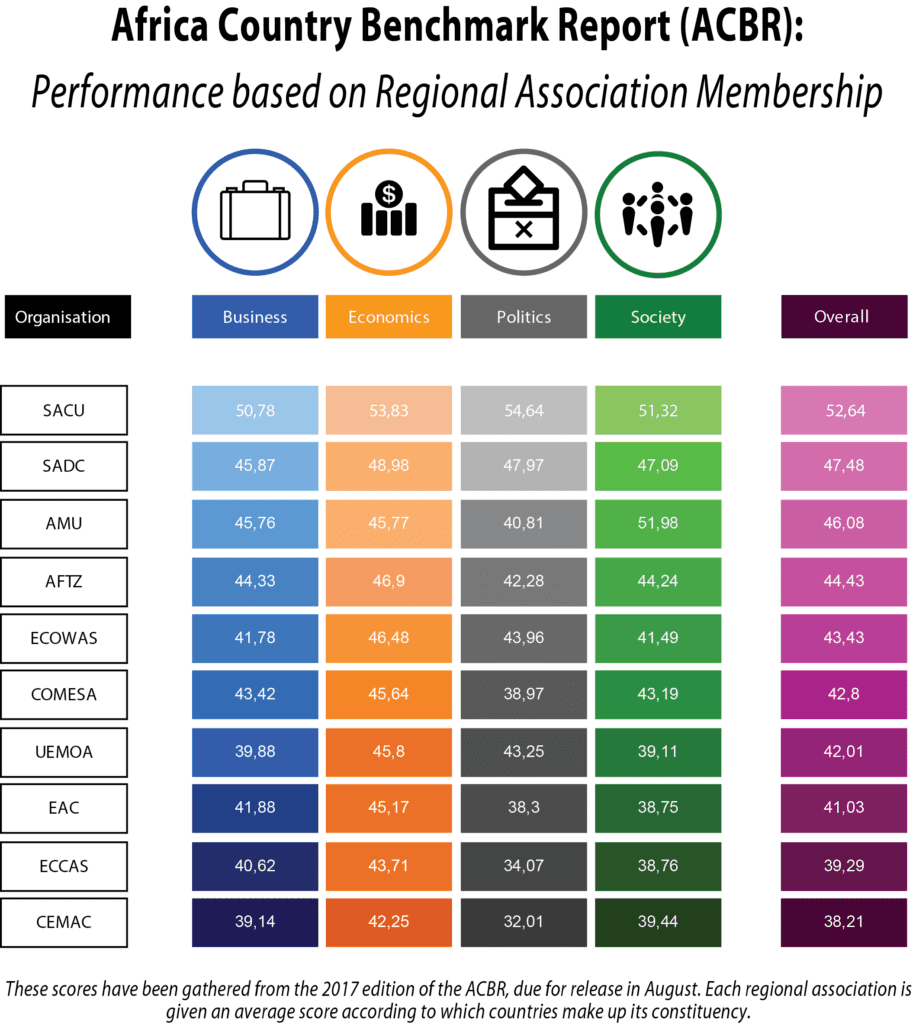 How effective any one region is at accomplishing its goals of boosting the economies and ensuring the security of its member states depends on the individual conditions of member nations themselves. Conflict-torn Central African states, whose political instability is reflected in ACBR index scores, hobble their own as well as their region’s economic growth, while putting significant demands on any regional peacekeeping force. However, more stable regions are capable of restoring order to rogue countries, as ECOWAS did in The Gambia in January 2017 and SADC did in Madagascar through diplomatic isolation and negotiations 2009-2014. Neither regime change resulted in bloodshed, signalling the artfulness of the blocs’ diplomacy coupled with overwhelming regional economic and military power against which the errant nations could not counter.

Similarly, the relative economic power and ability to affect positive growth in economies is rooted in any regional bodies’ individual economic performances, specifically with a bloc’s most robust economic performers. The EAC is economically anchored in the regional powerhouses Ethiopia, Kenya and Tanzania and ECOWAS in Ghana, Nigeria and Senegal. The economic fortunes of countries wax and wane, like Côte d’Ivoire in ECOWAS and Zimbabwe in SADC, a bloc dominated by South Africa. As the economic strength of individual nations improves, regional blocs will have more trade to regulate, which is the primary economic function of these bodies. The gradual growth of genuine democracy in African states, with The Gambia being the main example during the compilation of ACBR 2017, is leading to not just more political stability requiring less diplomatic and military effort by RECs but also economic growth and trade. In terms of ACBR scoring, SADC leads in all four quadrants, Business, Economics, Politics and Society. The performance of regional blocs tends to follow their region’s scores in ACBR aggregates, with North Africa’s AMU above West Africa’s ECOWAS, East Africa’s EAC and Central Africa’s CEMAC.

RECs also seek to raise the social performances of their constituent nations (indicated in ACBR’s Societal Index) through policies all member states agree upon. For instance, ECOWAS members signed an Education and Training Protocol in Dakar, Senegal in 2002. If all member states adhered to the policy, educational standards would rise uniformly in the region. However, practical application of the policy has been determined by the individual states’ financial means and political will, as well as an environment free of warfare or political instability. SADC heads of states meet annually to sign protocols on social matters, and in March 2017, Botswana became the latest nation to ratify the SADC Protocol on Gender and Development. The outstanding regional contribution of the EAC has been the EAC Peace and Security Protocol but also in the economics sector the region-binding EAC Customs Union Protocol and the EAC Common Market and Monetary Union Protocols. Although the AMU’s four-member states have enjoyed healthy economic growth independently, they are nonetheless committed to their REC that seeks economic and political unity in North Africa, which, if achieved, would definitely boost the social welfare of member states’ populations.

Africa’s trade blocs show there is strength in unity

The interlinking of African countries in RECs carries a significant symbolic meaning as well, as nations realise they are interdependent in economic and security terms. Countries that seek to advance independently in the face of regional concerns over their poor governance, like Burundi in 2017, find their performances diminishing on ACBR indicators, dragging down their regions’ performance as well.

In On Africa (IOA) is proud to announce the upcoming launch of the second edition of the Africa Country Benchmark Report (ACBR) – the most comprehensive assessment of African country performance ever conducted, scheduled to be released in August 2017. ACBR assesses the performance of all 54 African countries in an 800-page infographic-driven report. It is a key resource for any business, government, organisation or institution that will find value in country-specific and comparative assessments of all 54 African countries.